The Texas Bar Exam is administered over two days. The examiners have adopted the Uniform Bar Exam (“UBE”).

Texas administers the Multistate Bar Exam (“MBE”) on the second day of the Texas bar exam. The MBE is a multiple-choice test containing 200 questions. The MBE is split into a morning and afternoon session. Each session consists of 100 questions. You have three hours to complete each session.

Do you want to pass the Texas bar exam?
Start a free trial (no card needed) and get on the road to passing today.

Texas requires bar exam applicants to pass the Multistate Professional Responsibility Exam (“MPRE”). You must score 85 or higher on the MPRE in order to pass in Texas.

In order to pass the Texas bar exam, you must score at least 270 out of 400 points. This equates to 135, based on the MBE’s 200-point scale. The scores of the exam sections are weighted as follows: MBE 50%, essay questions 30%, and MPT 20%. Texas releases the February bar exam results around the first week of May, and the July exam results in the first week of November.

If you are an attorney from the United States (“U.S.”), then you may qualify for admission without examination when you fulfill several detailed requirements, including that:

No fuss, no card, no commitments - It's the Texas Way!

Jennifer was unsuccessful twice with Barbri before enrolling in an AmeriBar course.

“I felt so prepared and so well-versed in every area of the law for the exam. I never felt that way with Barbri the first couple of times I took it. I can’t say enough about how well-prepared I felt and how relieved I was after failing twice to come back and just nail it after six years of absence from the law.” 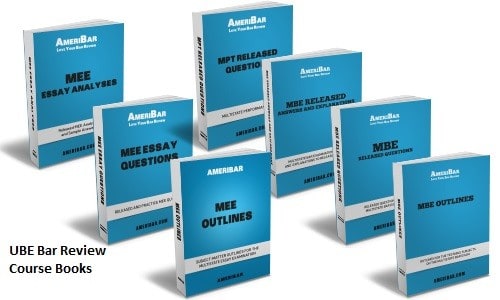 AmeriBar has been helping students pass the Texas bar exam for over 20 years.

Play
Well, the one thing I did do differently was not use Barbri... I used the AmeriBar materials and had the one-on-one tutorial for the essays. I do think it probably made a large difference in how I handled and approached my essays.
Play
I chose AmeriBar and I’m convinced that had it not been for AmeriBar I wouldn’t have passed the exam.
Play
I really appreciate everything AmeriBar has done for me. It was probably the best decision I’ve made in the past five to six years of my life. If I didn’t pass this time, I wasn’t going to take the bar exam again. Without AmeriBar it would have been another disappointment. My scores went up 10-15 points in each section. The only thing I did differently this time is use an AmeriBar tutor.
Play
So, I can’t emphasize enough how much I would recommend AmeriBar to any student. I was able to pass the bar on the first attempt, even in a state that I didn’t go to law school in, and I feel like AmeriBar was a very significant contributing factor to my success on the bar exam.
Play
Here we are again, second bar exam, second time passing. I was a first-time passer on both...I have absolutely no complaints about AmeriBar. Anyone who’s thinking of taking AmeriBar, I would definitely recommend it.
Play
You are also taking a step in the right direction by considering AmeriBar for your test materials.
Play
The first time I took the bar exam, I took the Barbri program, which was a big, huge program where you don’t get a lot of individualized attention. However, the second time I took a bar preparation course, I took it through AmeriBar. AmeriBar really provided the one-on-one help that I needed to pass the bar.
Play
This was the fourth time taking the bar ...and this time I passed. I used a competitor’s program for the prior three times, and I didn’t pass. I have to say that I think AmeriBar’s tutoring is what really pushed me over the top.
Play
I think having a personal tutor help to prepare me for the bar exam is the only reason I finally passed the bar. I can’t tell you how grateful I am to AmeriBar and their program.
Play
Once you go with AmeriBar they will help you emotionally and academically. They will get you 100% ready for the bar exam... I’m grateful for AmeriBar – because they helped me accomplish my dream. And without them, I wouldn’t be an attorney today.
Play
I felt so prepared and so well-versed in every area of the law for the exam. I never felt that way with BAR/BRI the first couple of times I took it. I can’t say enough about how well-prepared I felt and how relieved I was after failing twice to come back and just nail it after six years of absence from the law.
Play
After three unsuccessful attempts at the bar exam, I felt as though as though I had nowhere to turn.... AmeriBar is a large contributor to my success in passing and achieving the dream of becoming a lawyer
Play
They offered seven hours of personal tutoring and I thought, ‘wow this is a program that is quite different.’ So I signed up and paid the money. Guess what? That was what helped me pass the bar.
Play
I would tell law students considering AmeriBar they should go with AmeriBar because the materials are put together in a superior way. They read much more smoothly. I think they’re put together in a more sequential and chronological way. They are far easier to comprehend, and learning it in a linear sequential way, the way AmeriBar has them set out, really helped me pass.
Click here to watch over 50 additional AmeriBar reviews
Previous
Next

Heidi was unsuccessful twice with Barbri before enrolling in AmeriBar bar exam tutoring.

Heidi describes how AmeriBar was instrumental in raising her score from 121 to 144.

AmeriBar has been helping students pass the Texas bar exam for over 20 years.

Big-box bar review is made for the masses. Don't spend hundreds of hours listening to mind-numbing lectures and completing tedious checklists. Spend your time efficiently and effectively. With AmeriBar, you can study less and pass!

We constantly monitor the bar exam. Our materials are keyed to the scope of testing and focused on bar exam testability. We don't believe in the kitchen-sink approach. Utilize your time efficiently and effectively. Study smarter. Make the most of every minute.

Upcoming Bar Exam Dates Have Changed Due to Covid-19