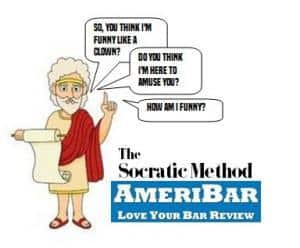 The mere mention of the Socratic Method to a lawyer may evoke an exaggerated cringe. Law school professors use the Socratic Method in law school classes. We’re not going to give you a lesson on Socrates, but we will tell you about his method of engaging students. Socrates would continually question his students until he found a contradiction in a response, thus finding an error in the responder’s initial presumption.

The Socratic Method is used by many law school professors, not to humiliate students, but as a method to engage a large group of students in a discussion and to stimulate thinking. The intent is not to fill students with anxiety before entering class each day, but to get the students to evaluate and craft logical responses based on their class studies. You’ve probably seen movies and television shows where the professor questions the student continually until every bit of confidence has evaporated. It’s not always like that, but if you’re not prepared to handle a (potential) barrage of questions, you’ll feel pretty badly when you walk out that door. Be prepared to answer multiple questions over your lesson for the day if you’re called on. Trust me, slumping down and not making eye contact won’t save you from being called on.

If there is one bit of advice we can give you before attending a class where the professor utilizes the Socratic Method, it’s that you must do all of your reading before class each day. Not only will you be better prepared, but you also won’t feel nearly as anxious when you hear your name called across the lecture hall.

Big-box bar review is made for the masses. Don't spend hundreds of hours listening to mind-numbing lectures and completing tedious checklists. Spend your time efficiently and effectively. With AmeriBar, you can study less and pass!

We constantly monitor the bar exam. Our materials are keyed to the scope of testing and focused on bar exam testability. We don't believe in the kitchen-sink approach. Utilize your time efficiently and effectively. Study smarter. Make the most of every minute.

Upcoming Bar Exam Dates Have Changed Due to Covid-19